bread on the barbecue 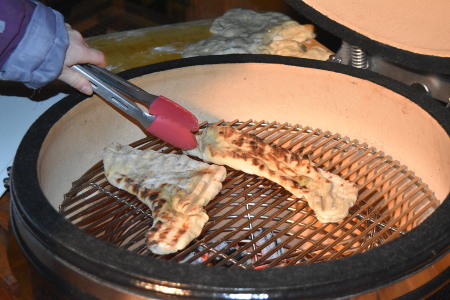 Bread on the barbecue is something I’m fairly new to. In all honesty, my only bread memory growing up was making little bread rolls in the shape of hedgehogs with my sister and best friend – sadly, my bread making expertise never extended beyond that.

However, I began to realise the importance of uniting bread and the barbecue when I thought about one of my favourite junk foods: pizza. If I can’t make a good dough, then how am I going to make a successful pizza on the barbecue? Time to experiment methinks.

So here are a few of my favourite barbecued bread recipes that I’ve developed, alongside a few tips and things I’ve learnt along the way.

Turning a barbecue into an oven

Everyone knows that you can cook on a barbecue by putting food on a grill above hot coals. Simple.

This works perfectly for some bread recipes, such as flatbreads. However, that’s not the best way forward to cook most bread on the barbecue.

As you know, bread is usually baked, and so we have the task of recreating that oven environment within a barbecue. Although that may sound daunting, it’s actually really simple to do.

So first of all, we need a barbecue with a lid – sadly, an open top grill is not gonna do the trick. I cook on a Monolith ceramic grill; the ceramic shell really helps to keep the heat in, creating an ideal oven environment.

Secondly, we need a heat deflector stone to sit on its stand above the charcoal and below the food. This stone absorbs the direct heat from the coals and heats the air around itself, providing a source of indirect heat to the food. The convection currents allow the whole interior of the barbecue to be heated evenly, creating an oven system.

The heat deflector stone works best when the food is raised further up above it, so adding a second tier to the grill will allow you to better control the cooking environment. At this point, you can place a pizza stone on top of the upper tier grill, giving a solid platform upon which you can cook.

From here, you can place your dough straight onto the pizza stone or pop it in a tin before putting it on top of the upper tier grill, depending on what your recipe calls for. 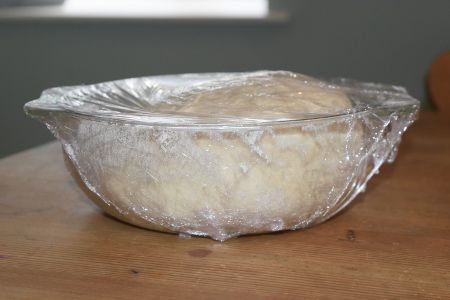 When making bread on the barbecue for the first time, I made the fatal mistake of using some yeast that I found right at the back of the cupboard that looked “promising”. No. Just don’t.

Make sure that whatever yeast you use has been bought recently, and has been properly sealed so that it hasn’t oxidised. When I went to make this first loaf of bread the dough didn’t rise at all; only a hard crispy layer had formed on top of the raw dough. At first I was convinced that this was just due to my poor method and general bread-making inexperience, but when my dad used the same yeast in our bread-maker, he ended up with a rock-solid half-sized loaf. Sad times.

So the take home message is: always use recently bought yeast for your bread cooked on the barbecue!